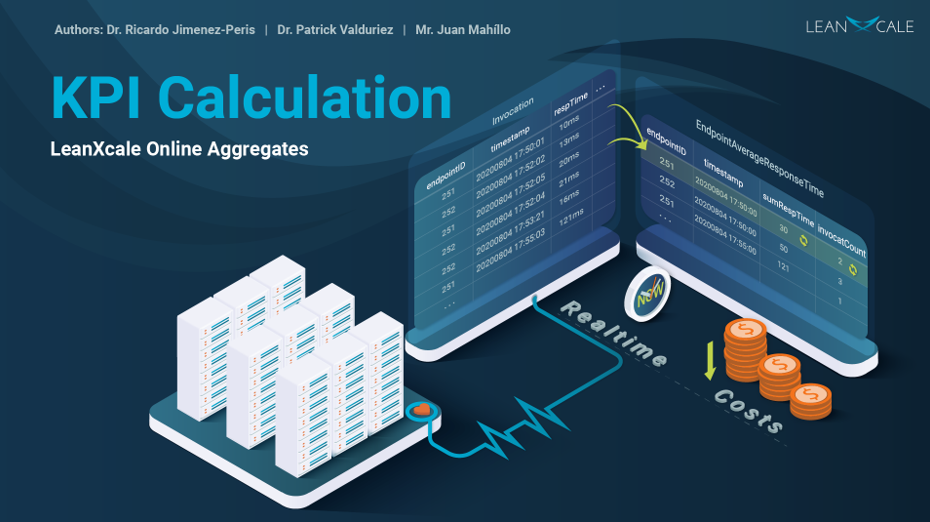 In real time analytics, a major requirement is to be able to ingest data at high rates, while at the same time compute aggregations over the real-time data. For instance, a common use case is ingesting data at high rates and computing KPIs or other metrics, over the ingested data. Examples of this use case are performance monitoring, IoT, eAdvertisement, smart grids, industry 4.0, etc. This kind of workload is troublesome for SQL databases because they are not efficient at ingesting data. Also, the aggregate analytical queries are very expensive because they need to traverse large amounts of data very frequently. NoSQL databases (see our blog post on NoSQL), in particular key-value data stores, are good at ingesting data more efficiently and handle that part of the workload. However, they are not good at analytical queries, if at all supported. As a result, it is very common to find solutions that need:

One differential key feature of LeanXcale is online aggregates. LeanXcale has developed a new technology based on a brand new semantic multi-version concurrency control (patent pending) that enables it to compute aggregates in an incremental and real-time manner, using aggregate tables. As data are ingested, it becomes possible to update the relevant aggregate tables, so aggregates are always pre-computed. Thus, the formerly complex developments or architectures become a basic architecture with almost costless queries, that read one or more rows of an aggregate table. Data ingestion becomes slightly more expensive but removes the cost of computing the aggregates. In the following example, we motivate the concept of online aggregates by showing that a NoSQL data store or a traditional SQL database cannot solve the problem. Then we explain how the new technology from LeanXcale succeeds at solving this use case.

In application performance monitoring, it is very important to detect anomalies in the application behavior as soon as they happen, in order to reduce the Mean-Time-To-Repair (MTTR). Typically, the behavior is modelled by at least two metrics: number of invocations and average response time.

Since these events are asynchronous, they are aggregated frequently with a temporal criterium to simplify their management in dashboarding or to define the threshold of what is considered an anomaly. Commonly, it is also necessary to know these metrics at different aggregation levels: customer, application, application server, and endpoint (e.g., a REST API endpoint or any other user actionable unit).

In this example, we describe how to compute this aggregation hierarchy in real-time in a totally accurate and inexpensive way. We maintain an invocation table for tracking the endpoint invocations in real-time (see Table 1). Each invocation row contains the timestamp of the invocation, the response time, the endpoint, and any other information of interest that we do not detail here.

We need a reference to determine if the endpoint 251 invocation at 17:55:03 is working correctly. We use a simple model, taking as a threshold an anomalous response time two times the average response time of the previous period. In this case, in the period [17:50-17:55[ the response times recorded were 10 and 20, yielding an average of 15 ms. The response time at 17:55:03 is 121ms > 2x15ms=30 ms, so it is considered anomalous. More complex models take into consideration application, infrastructure, or temporal criteria.

In a SaaS platform, this would mean aggregating several million rows per second.  Let’s think that this tool should be ready to aggregate invocations and calculate average response time for any generic endpoint.

Then, every time an endpoint is invoked, an invocation row is added to the invocation table as part of the same transaction and the corresponding row of the EndpointAverageResponseTime aggregate table is updated. In the aggregation EndpointAverageResponseTime table, we would update the row with the associated endpoint and timestamp, updating the value by adding the new response time to the sumRespTime column and incrementing the number of invocations column by one. Table 1 depicts an example of a few rows of the table. After getting the metric: (251, 20200804 17:50:01, 10), and before getting the metric (251, 20200804 17:52:05, 20), the row for (251, 20200804, 17:50:00) in the EndpointAverageResponseTime aggregation table would be the one depicted in Figure 1.

Table 2) would have the endpointID (an integer) as key and the timestamp (day, month, year, hour, minute, second) of the start of each 5-minute interval. Then, every time an endpoint is invoked, an invocation row is added to the invocation table as part of the same transaction and the corresponding row of the EndpointAverageResponseTime aggregate table is updated. In the aggregation EndpointAverageResponseTime table, we would update the row with the associated endpoint and timestamp, updating the value by adding the new response time to the sumRespTime column and incrementing the number of invocations column by one. Table 1 depicts an example of a few rows of the table. After getting the metric: (251, 20200804 17:50:01, 10), and before getting the metric (251, 20200804 17:52:05, 20), the row for (251, 20200804, 17:50:00) in the EndpointAverageResponseTime aggregation table would be the one depicted in Figure 1.

After the metric (251, 20200804 17:52:05, 20) is inserted in the Invocation table, we would update the above row in the EndpointAverageResponseTime aggregation table by adding 20 to the sumRespTime column yielding 30 (10+20) and incrementing the invocatCount column by one; yielding 2 (1+1) that would result in the row shown in Figure 2.

How does LeanXcale solve the problem? With a new technology based on a patent-pending semantic multiversion concurrency control. In this new concurrency control, writes are not blind. The writes would actually carry the operation to be performed, e.g., Sum(10) and Sum(20) for sumRespTime column in the above example. Since additions are commutative, they do not conflict as far as one keeps track that they are additions until the corresponding version of the row is generated. In order to attain data consistency and, in particular, the expected data consistency in multiversion concurrency control (snapshot isolation), one has to be really smart when handling multiversioning. This is exactly what the technology developed by LeanXcale does. LeanXcale’s distributed storage layer, KiVi, supports a new kind of column, aggregate columns (also called delta columns), which adopt this new semantic multiversion concurrency control and enable online aggregates. What is interesting is that this feature can be combined with the linear scalability of LeanXcale (see our blog post on Understanding Scalability).

Aggregate columns are conflictless. The way versions are handled is as follows. Two kinds of rows are considered: regular rows or value rows. That is, rows that contain values as in any traditional database, and operation rows (also called deltas) that represent operations to be performed over the columns of the rows, e.g., (252, 20200804 17:50:00, Sum(21), Sum(1), CTS=1). One key problem is that, since operations are conflictless, there might be gaps in the commit order, so in general it is not possible to generate value rows for each operation row at the time a transaction with operation rows is committed.

How Online Aggregates Work? Getting Multiversioning Right is not Easy

Let’s examine the previous example. Assume, in the above example, that the transaction with the measure of 21ms is t1 and that with the measure of 16ms is t2. Assume that t1 commits first and the transaction that commits second is t2. In multiversion concurrency control, rows are labeled with the commit timestamp (CTS). The commit timestamp is just an integer that is increased monotonically and determines the commit order. Assume that the worst case happens and t1 gets a CTS 2 and t2 gets a CTS 1. If a transaction t3 is started after the commit of t1 and before the commit of t2, it would get a start timestamp (i.e., snapshot) of 0, that is, the snapshot before both t1 and t2, to guarantee that it does not observe any gap in the commit order. If it got the snapshot at timestamp 2, it would miss the updates from the transaction with CTS 1, which would violate snapshot isolation.

Monitoring tools need to ingest data at high rates and compute aggregations at the same time. These tools commonly use a combination of in memory data structures with persisted information to provide dashboards, forecasts, or identify anomalies. NoSQL or SQL are not efficient with these aggregation tables.  They get very complex and hard to maintain and have issues with durability of the data, seeing as, when there is a failure, the part stored only in the memory part is lost and cannot be recovered. Using a solution that guarantees durability in the event of failures with a NoSQL data store does not work since the aggregations get the “Lost Updates” inconsistency problem. Whereas with an SQL database, one gets high contention. Thus, tailor-made applications or complex architectures combining different database technologies have to manage the computation of aggregates. Ultimately, incrementing the development and maintaining costs.

LeanXcale has solved the problem with a (patent pending) technology, online aggregates, based on a new semantic multiversion concurrency control. With this new semantic multiversion control, there are neither “Lost Updates” inconsistencies (as in NoSQL) nor contention (as in SQL). However, at the same time, full ACID consistency as mandated by Snapshot Isolation is provided.

LeanXcale solves this common use case in a highly efficient manner. Consequently, the formerly expensive architectures or applications become quite simple due the fact that the database manages all the complexity. This technology provides a multiplier effect in conjunction with the linear horizontal scalability: Developers only have to create aggregation tables, ingest and perform regular gets, and they can use it at any scale.

This blog series aims at educating database practitioners on the differential features of LeanXcale, taking a deep dive on the technical and scientific underpinnings. The blog provides the foundations on which the new features are based and provides the reader with facts, allowing them to compare LeanXcale to existing technologies and learn its real capabilities.