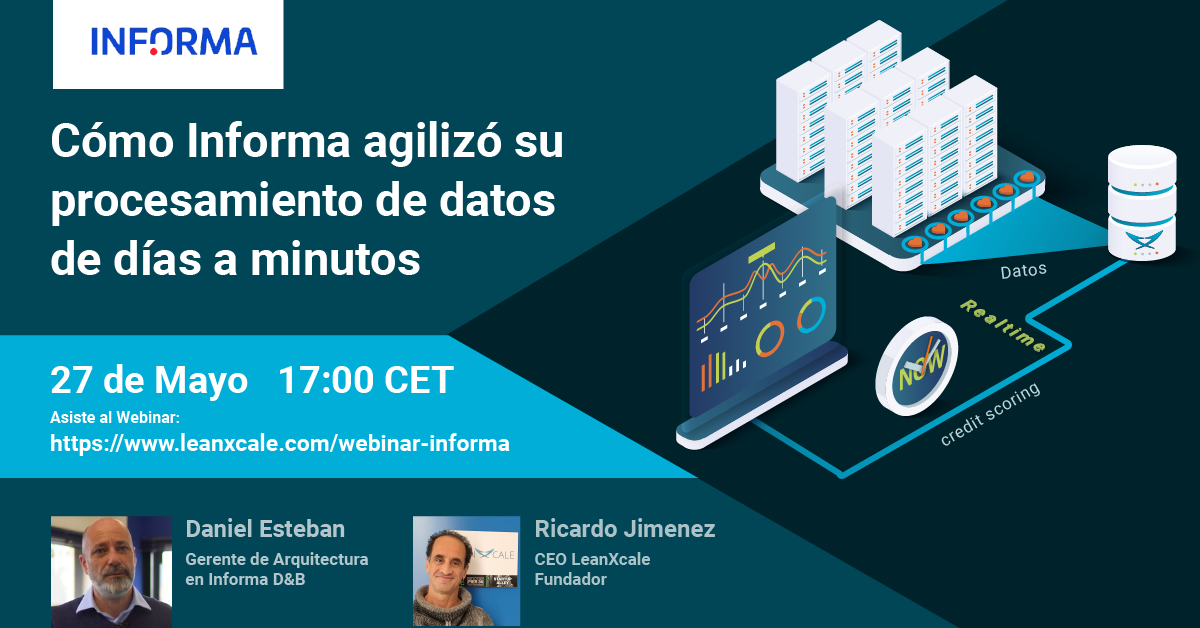 – In an online event held on May 27th, LeanXcale showed the details of the project developed at Informa D&B, leading business information company in Spain, Portugal, and Colombia, and a member of the D&B net.

– In this event, Daniel Esteban, Architecture Manager at Informa D&B, provided an in-depth and highly technical overview of Informa’s data architecture and the improvement that LeanXcale has brought.

– More than 400 data professionals from Spain and Latin America registered for the event.

LeanXcale, Spanish software manufacturer, has closed a great deal with Informa D&B, leading business information company in Spain, Portugal, and Colombia; part of the CESCE Group, and member of the D&B net.

To share the success story at Informa, LeanXcale hosted an online event where Informa’s Architecture Manager, Daniel Esteban, explained in depth their data architecture and the role of LeanXcale database in it.

Daniel, one of Spain’s leading experts in big data, introduced Informa’s data lake to the audience: a platform with more than 120TB and 300 servers that store the biggest database of Spanish business information.

LeanXcale, he explained, is working in a critical part of this data lake, where there was a need of mixing high data ingestion, fast querying, SQL, great scalability, and cloud deployment.

To illustrate the improvement achieved with LeanXcale versus the previous scenario with Oracle, Daniel showed the acceleration achieved in some of the processes.

Apart from the actual use in the BDMark of Informa’s data lake, where LeanXcale is already in production, Daniel explained that considering LeanXcale versatility and performance, soon they will be using it on several other places of their data lake. For this, Informa has signed a ULA (Unlimited License Agreement) with LeanXcale since they forecast an intense use of this database.

To close this event, Juan Mahillo, LeanXcale’s CRO, showed a demo where LeanXcale ingests records from a dataset of loans at a pace of 780k/s using a couple of commodity servers with four cores and 16GB of memory, and then perform SQL queries over it.

If you want to see the highlights of Daniel’s participation and the demo, check this video.