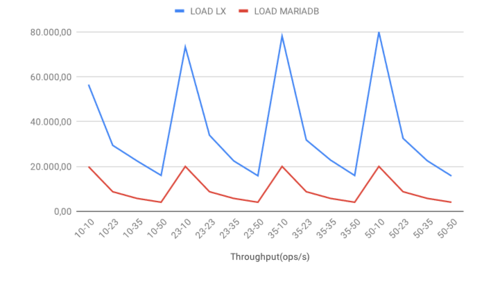 MariaDB is one of the most popular and widely adopted relational databases in the world. LeanXcale is an ultra-scalable relational database that includes NoSQL features to provide high insertion rates. In this post, we put LeanXcale head-to-head with MariaDB to compete on data ingestion and processing against the YCSB benchmark.

The Yahoo Cloud Serving Benchmark (YCSB) is an open-source specification and program suite often used to compare the performance of NoSQL database systems. As they describe YCSB, “the goal of the project is to develop a framework and common set of workloads for evaluating the performance of different ‘key-value’ and ‘cloud’ serving stores.”

THE RULES OF COMPETITION

The following is a summary of the conditions applied to this benchmark. If you want to see more, then you can read the full benchmark.

The READ operation demonstrates how the performance of MariaDB remains static with a slight drop-off as client numbers create more overhead. For LeanXcale, the scenario is clearly different as the performance increases. As soon as clients are added, the performance goes up, and we maintain stable performance by further increasing the number of threads.

In the scenario of the READ_UPDATE mixed operation, unsurprisingly, we observe a similar outcome as READ with some aspects as with UPDATE. The MariaDB performance is reasonably stable but does not improve with increased loads. The LeanXcale performance increases as we add clients and maintains stability with more threads, and at very high loads, we experience a slight drop-off.

The LOAD operation workload shows a different pattern from the previous cases. For both databases, increasing the number of threads per client results in a performance decrease. There is an essential difference in this scenario. MariaDB has a performance peak at ten threads, which remains constant over an increased number of clients. LeanXcale, on the other hand, also peaks at ten threads, but this peak value increases with more clients. In practice, this result demonstrates that while the MariaDB cluster reaches a bottleneck, the LeanXcale cluster continues to accept more load.

Why does LeanXcale offer such a better performance? Two features make LeanXcale so efficient for data ingestion:

LeanXcale offers a lower Total Cost of Ownership and a faster Time to Market compared to MariaDB. The infrastructure costs for both databases at maximum capacity used during this benchmark include:

LeanXcale costs 4 times less in writes and 58.9 times less in reads. Additionally, the LeanXcale characteristics also offer an engineering cost reduction due to its versatile database engine and data architecture simplifications as well as operational cost reduction because of the elastic management and lower cloud resources required for any workload.