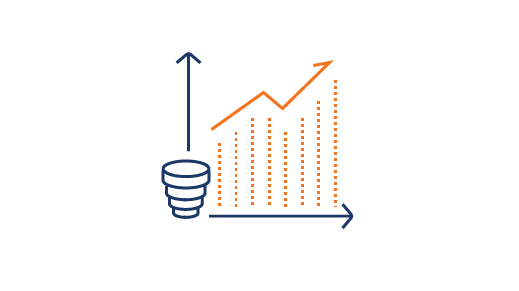 In recent years, companies have started to make the most of their data assets. This means they can utilize their resources better, personalize their portfolio and improve the quality of service; in other words, to make smart-decisions based on data.

To achieve this aim, they require modern data pipelines to quickly extract information from any source and then transform it into a usable form, at a corporate scale.

But these data pipelines must overcome two main obstacles:

LeanXcale is a database vendor that creates an efficient database, blending the capabilities of high data ingestion of a key-value data store, the ease of query with SQL, and linear horizontal scalability.

This versatility makes LeanXcale an optimal database for data pipelines, since its capabilities allow the use of a simple architecture with a single database engine:

Relying on LeanXcale results in an absolutely simple architecture that increases the solution agility and reduces the TCO of the solution.

Purpose of the document

Cost optimization is a business-focused discipline for reducing spending and, more generally, costs, while still maximizing business value. In the following sections we will describe the impact of LeanXcale’s usage in the following aspects:

This document explains how both the Business and IT teams can cut costs and grow revenues by means of LeanXcale, in comparison to the market leader in a hypothetical scenario.

After €5M investment on development, one of the services for Acme Corporation provides a yearly benefit of €12M.

This service requires an 18-hour daily analytical process. It captures 6 billion rows from several operational databases. Later, it processes them into an exploitable format. Five per cent of the time, the process cannot complete its execution due to the reduced margin (18 hours of execution vs 24 hours of the day). The process is executed in a 96-core server in a hybrid cloud, using the market-leader database. An SQL application interacts with the process outcome.

In summary, the numbers are as follows:

LeanXcale’s architecture provides two main advantages: the efficiency of its store engine and the horizontal scalability.  According to LeanXcale customers’ experience, LeanXcale’s performance is 72 times higher than the market leader. In other words, to execute the same workload on the same 96-core server, LeanXcale needs 15 minutes.

In this scenario, we will use three 8-core servers (equivalent to using a 24-core server). As we said before, 96 cores with LeanXcale in this scenario would take 15 minutes to run the process. So, since we are using 24 cores, the performance will take four times more (96/24=4), that is one hour.

In summary, the numbers are as follows:

Database licensing is one of the most important cost sections in a smart-driven application.

Additionally, LeanXcale can also be acquired in a traditional perpetual license:

In both scenarios, LeanXcale has a cost of 4% (or 24.18 times less) of the equivalent legacy scenario. This represents a saving of 8,3 million euros over five years.

When there are performance issues with applications, processes or databases, often the easiest solution is to throw more hardware at the problem. A lack of database efficiency makes companies overprovision their environment in order to support minimum performance levels. However, this strategy is very expensive.

LeanXcale can perform 72 times faster than the market leader in the same infrastructure. This efficiency greatly reduces the processing time, and the underlying hardware can be released for a different use. Alternatively, the process can be executed with less hardware.

In cloud environments, LeanXcale’s performance ensures a proportional reduction in the infrastructure bill. In short, the LeanXcale scenario is 72 times more affordable.

Something interesting about LeanXcale’s linear scalability is that, in any combination of servers, if the hardware cost is proportional to the process capacity, the execution cost is the same.  For instance, if you use six 8-core servers (two times more than in this scenario), the execution time will be half and it will again be 72 times more affordable than the legacy one. So, with no extra cost impact, you can choose different combinations according to your economical interest (i.e., reuse old hardware or use small and cheap servers) and your temporal goal (i.e., having results in 30 mins).

Data scientists, data analysts or actuaries need to work with the output data to create models that represent the reality. These models are created incrementally after several interactions: observe the data, improve the model, train the model, and test it. A big portion of this loop is performed by machines, and the team’s performance relies heavily on the length of these periods: the shorter the process is, the more productive the team becomes. Due to the fact that LeanXcale’s execution is much faster than the legacy one, their performance increases.

Let’s assume that for 25% of their working time, a data scientist is waiting for the legacy execution. The execution time reduction produced by LeanXcale’s performance can increase the team’s performance by a third, since the “waiting per results” time is 80 times lower with LeanXcale, and the total occupation time increases from 75% to 99,7%.

Long execution processes create a lot of operational pains. Companies lack any response capacity against unexpected events. This often means that a small failure leads to a full day with no service, and an obvious impact on the revenue stream and/or the reputation of the company.

With the abovementioned infrastructure, LeanXcale can execute the process in one hour. Therefore, a heavy, whole-day process becomes a light one that can be executed several times during the same day. If something unexpected happens, you can try it again at that time.

In a profitable service, a small percentage of days with problems, for example 5%, have a severe cost in terms of revenue. However, this can be easily overcome with LeanXcale, making your business much more reliable.

It is well known that more than half of the historical data has been stored during the last two years. Data-driven companies are storing more and more information. The existence of competitors force companies to continue producing and developing new capabilities in order to fulfill customer demand. This combination of new demand and increasing data quantities means that data-driven companies need to process increasingly bigger volumes of information.

Some architectures cannot scale out and require an entire redesign to provide the required level of service.

There are several options:

LeanXcale is able to scale up to hundreds of nodes in a linear manner, as the graph below displays. Notice that it is a representation of a TPC-C benchmark on a cluster of 1, 20, 100, and 200 LeanXcale nodes. The performance of the 200 nodes cluster is 200 times the one node provides.

Using the scenario example, assuming we use two hundred 96-core servers, the same architecture can manage 86.4 trillion rows; 14,400 times (72 times more performance x 200 nodes) more than the market leader. In other words, any development investment will produce returns forever with no extra investment.

Cost of Opportunity and Business Impact

LeanXcale allows much more information to be processed at much higher frequencies. LeanXcale’s huge data processing capabilities enable a wide range of new data driven business cases, which cannot be addressed today. LeanXcale thus becomes an important lever for differentiation and optimization; having a direct impact on the market share that these services can expect.

The cost of opportunity of not developing this kind of solution is difficult to estimate, but assuming that 10% of the current market share can be impacted by releasing these functionalities:

LeanXcale is a database technology that can perform exceptionally well for data pipeline use cases by playing a vital role in the journey of banking, insurance and other demanding data usage verticals.

As previously mentioned, LeanXcale provides a crucial total cost of ownership reduction and, at the same time, a strong increase in the platform’s capacities. This is achieved by allowing more data to be processed with more frequency.

A 72-times improvement in performance that yields:

Mr. Juan Mahillo is the CRO of LeanXcale and a former serial Entrepreneur. After selling and integrating several monitoring tools for the biggest Spanish banks and telco with HP and CA, he co-founded two APM companies: Lucierna and Vikinguard. The former was acquired by SmartBear in 2013 and named by Gartner as Cool Vendor.

Finance or Insurance Company? How to speed up data processing and why you should
Blending Efficient Ingestion and Querying